Flatulence and Physical Fitness - Can we survive? 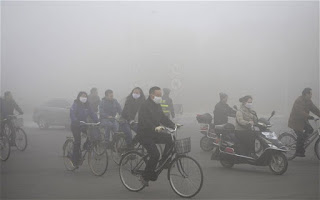 A while back, my spousal unit and I realized that we had gotten out of shape: the clothes were snug, the breath was short and the joints were stiff. There was only one thing left to do; we decided to stop the insanity and to start eating healthily. That we made this momentous decision while scarfing down a pizza is beside the point, but in any event we made it stick. The pounds began to disappear and before long we were exercising - which brings us to this sour moment.

Our gym is a spacious place that offers a wide variety of fitness programs and classes. One of the said classes is "Power cycle 45", which is 45 minutes of vigorous pedal strokes on stationary bicycles made specifically for that exercise. The class is lead by an instructor, who plays upbeat music and barks out commands and encouragement. But lately a force has arrived that drowns out the instructor's commands and renders her encouragement impotent.

It is here that I should warn the reader who stumbles upon this missive that the subject matter is not genteel. Some may even think this whole thing to be crude - and it is! So, if you're squeamish, turn back now.

We arrive to the gym at 5:40 and get our bikes ready. We warm up for 5 minutes and then it starts. Typically, within 10 minutes we are breathing hard and sweating profusely. And it is in that gasping, vulnerable state that recently, on several occasions, someone in the room is - how shall I say it?- easing one out! It is not an audible salvo; oh noooo, the presence of the beast, at first, is entirely an affront to the olfactory. So imagine if you will - you've got the beat, you're "adding gears" and "engaging your core", then suddenly there is an enemy. And its not just any old garden variety demon I tell you. It has legs. It's a protein enriched, paint peeling, nose hair singeing assault that advances, retreats and advances again (we think the circular flow of the ceiling fans enhance that effect, but it could be other incoming sorties).

At first, you think you'll survive by breathing through your mouth only; thereby by-passing the sense of smell. But no. You soon discover that this mutant wave has a corresponding flavor and the thought of this phantom gas finding a home in your lungs is a little too much for even an able bodied soul to endure. So, there we are, defenseless, at the mercy of the killer fog and no avenue of escape, save running from the room. We are perplexed and perturbed...but not defeated.


So now, we are looking for suspects - and there are several: The bald guy who always leaves a few minutes early - it did seem that the air was better after he left. But perhaps not. Then there is the big, T-Rex looking older guy with the forehead like a drive in movie screen; he sweats gallons which leads me to think that he'd fog the place out with no problem. But there is no sure fire proof. And let's not let the women off the hook. There's a couple of them in there that have the distinct ability to empty a room - no doubt about it.

So, my intrepid wife and I are on the case like dogged private investigators slinking around in trench coats, collars up, standing flat against the wall to avoid detection. We intend to get to the bottom of this offense. So far our best ideas are:

In any event, I must apologize again for the crude subject matter, and I hope that future missives are  more pleasant and uplifting - but, assuming we survive this invader,  it's not likely.


Posted by Thomas Lawrence at 11:57 AM No comments:

Brandon community bowling alley and skating rink - July 1968: He had noticed this new lovely last Saturday night as he pushed the dust mop up and down the lanes. He did this routine task every night, a few minutes before the cigarette smoking, shit talking, hardcore bowlers arrived. Over on the skating rink that adjoined the 8 lane bowling alley, the skaters were there, early as usual; their mindless chatter a cacophony of teenage madness. He had thought about this new, graceful beauty all week and now here she was again. His mind whirled with plans designed to, at the very least, somehow catch her eye. Suddenly, his romantic reverie was shattered by the building manager's piercing reprimand. He looked up to see William Donahue's wonky finger pointing at the waxy hardwoods: "We ain't got all day boy!" "Yes, sir, I'm on it", he croaked back; but despite the admonishment, his gaze immediately drifted directly back to the alluring figure sitting just apart from the gaggle of chewing gum chomping chirpies. To his amazement, she demurely looked his way and smiled at him as she laced up her skates; then abruptly, with one graceful pirouette, she was on the floor. She could skate rings around the other girls...and there was just something about her. So, it had come down to this, Saturday night with Frankie Valli blaring from the juke box, and his heart beating a little faster...

Her skating skills were legendary,
a hardwood ballerina.
She had talents more profound
Than skating round in circles

Shy with eyes most otherworldly,
happily a chance beginning.
Lead to one short, stolen kiss
and a love that's never ending

Shy with eyes most otherworldly,
happily a chance beginning.
The skating rink has long been gone,
but the love is never ending.

Author's take: Too many unnatural rhymes, but, you know, man, the times were desperate.


Posted by Thomas Lawrence at 10:59 AM No comments: 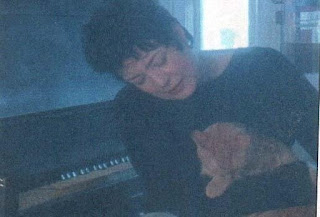